Whether taking wildlife or flowers, the easy option is to shoot either by standing and raising a camera to your eye level and looking ahead, or by bending over and looking downwards. The perspective gained from our normal eye level – some 2 metres above the ground – is quite different from that seen by mini-beasts that scuttle around on terra firma.

Fiddler crabs have periscopic eyes with 360° vision that sense the slightest movement, causing them to make a rapid scuttle back down their burrow. Having failed to get a decent shot either by using a telephoto lens or by crouching over a camera on a tripod, I decided to reduce my profile by lying prone on a wet tropical beach and wait for the crabs to come within reach. This worked a treat, with one crab crawling inside the lens hood – far too close to focus the lens. 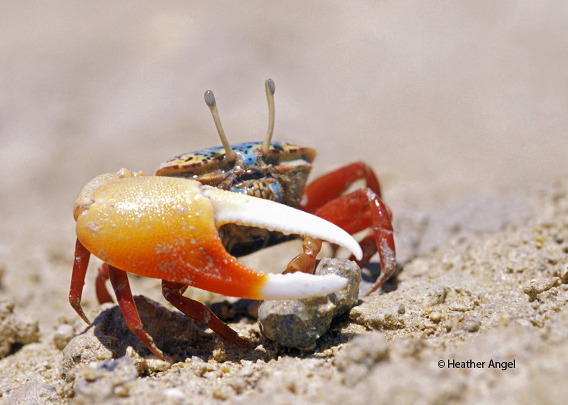 A male fiddler crab emerges from its burrow to feed at low tide in Egypt. Captured with a 105mm macro lens, the crab ‘pops’ from the background. 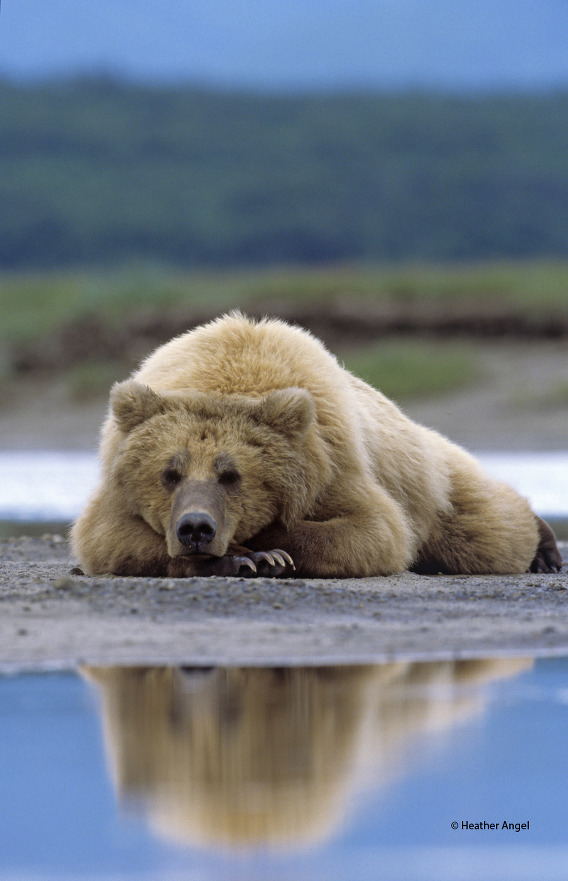 A 500mm lens allowed for a safe low angle shot of a relaxed brown bear plus its reflection at Hallo Bay in Alaska.

The best way of showing an organism, whether it be a small flower, fungus, an invertebrate, amphibian or reptile within its habitat, is to shoot low with a wide-angle lens that focuses at close range, yet shows the habitat beyond. 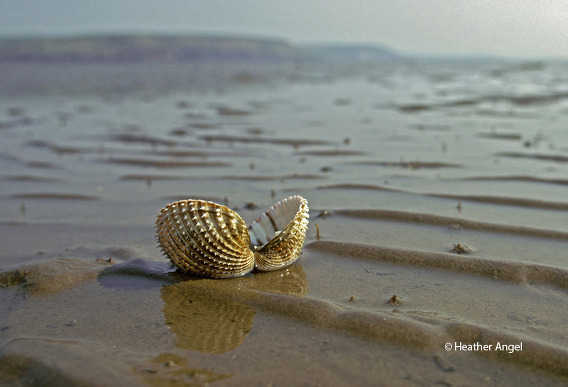 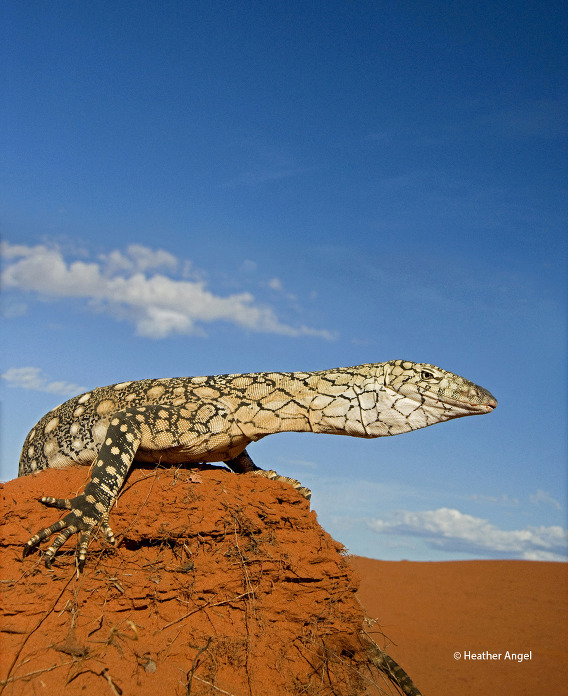 A low angle with a 24-85mm wide-angle lens at 38mm, gives added impact to a perentie goanna – Australia’s largest lizard. 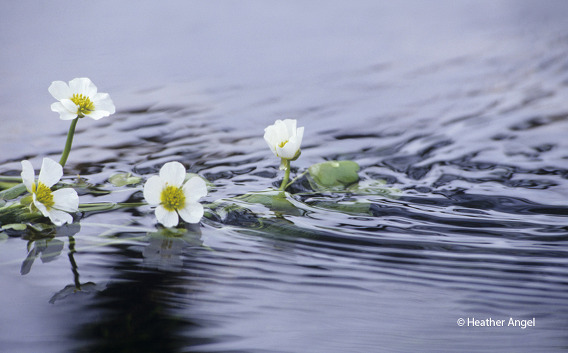 The first shot I took of water crowfoot was with a short telephoto lens from above. Only when I bent down low to pack my gear away did I see the ripples created by the emergent stems that showed the shadows alternating with the sky lit ripples. Proving it always pays to try an alternative angle.

A tripod always helps to refine the composition when taking a static flower or a fungus. Whether using a tripod or not, to avoid having to lie prone to get your eye close to the viewfinder, use either a right angle viewfinder or a swivel live view screen.

A Benbo tripod is speedily adjusted from normal eye level down to a worm’s eye view simply by unlocking a single lever, adjusting the angle of all three legs and the centre column before relocking. 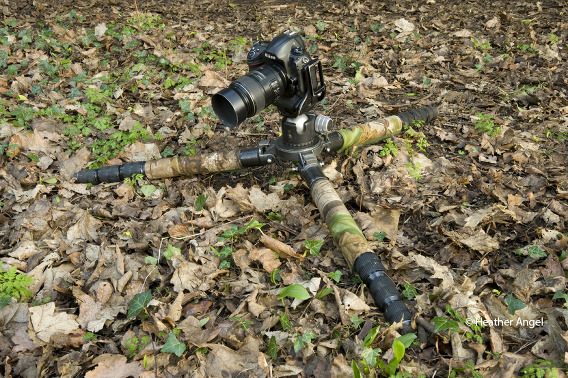 Gitzo tripods without a centre column can be speedily collapsed to ground level. This one has camouflage leg warmers.

Shooting down onto pollinators from above rarely reveals how they feed on nectar or pollen, because the body invariably hides the mouthparts. However, by getting down to their level, the large flat proboscis lobes of a hoverfly can be seen lapping up pollen from any flower with open access. 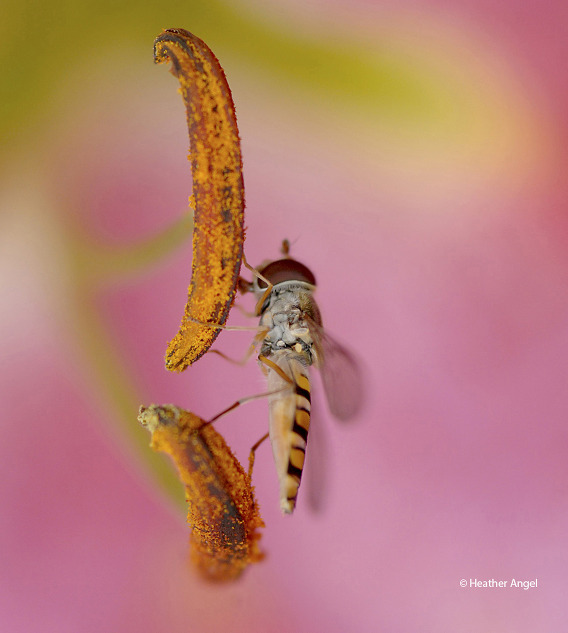 A macro lens captures a marmalade hoverfly as it laps up lily pollen using a broad proboscis. In the process all the legs pick up sticky pollen which gets transferred to the next flower it visits. 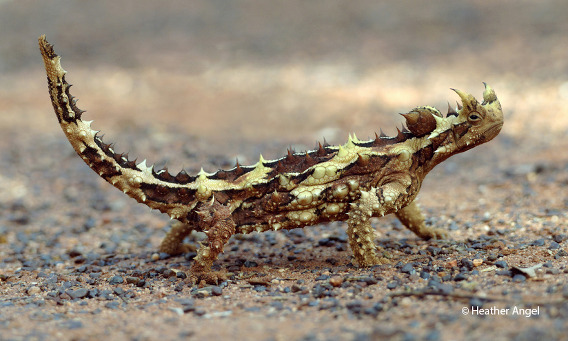 Hand-holding a macro lens in a prone position, shows how a thorny devil raises its body up off the ground in Australia.

Shooting from a low angle may take a bit more time than raising the camera to normal eye-level, but hopefully these few images will show it is well worth the effort for gaining greater impact.